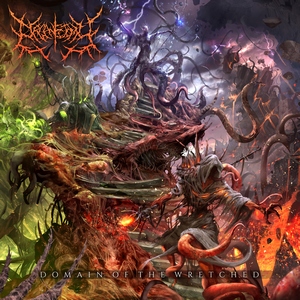 Originally released independently last year, Organectomy signed with Unique Leader Records, who are doing everyone a solid and taking Domain of the Wretched to reach a larger market. No doubt a deserved treatment based upon listening to the album, which may come to surprise quite a few who are willing to give it a shot.

With a name like Organectomy, and the cover art displayed, it seems a spot on choice that brutal death metal will be the name of the game. And for the first few songs, that’s exactly what you are going to hear. Monstrous slams (more rooted in brutal death metal than that of deathcore), pulverizing vocals, and plenty of blasts will get the adrenaline kicking in just the right way. “Sanctum of Deceit” simply oozes with ferocity from the moment you hit play, as do others like “Inherent Revulsion” – the sort of thing that is bound to give you a sadistic grin from ear to ear when they drop the tempo and hit the slamming sections. But at 50-minutes, it could be enough to turn anyone’s brain to mush. Thankfully, Organectomy have a few tricks up their sleeve. They don’t shy away from atmosphere when it’s needed to enhance the vibe (“Cascading into Despair” or “Archaic Infestation”) and give these instrumental cuts a sense of urgency that pulls you along for the ride. But they also lace other songs with some quasi-technical riffing or subtle melodies (it’s a real stretch to say melodeath when the groove hits this hard) that aren’t mere distraction but are slyly incorporated into the song to give it more purpose (see the title track). If one thing can be said for Organectomy, it’s that it may be slam-based, but these are songs through and through.

An album with some of the most destructive and violent sounding slams in recent memory, the best surprise that Domain of the Wretched pulls is its versatility. Sprinklings of melody and technical flashes keep things moving as you wait to be knocked over by the next slam. A thoroughly satisfying combination for death metal fans. 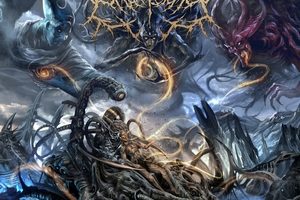