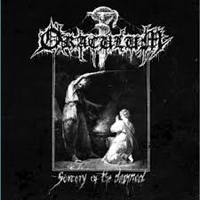 Kvlt as fuck, more or less. Hailing from dark corners of the Earth and possessing a surprising degree of finesse across these four otherwise ugly bits of work, this is cavernous death metal, no frills or wasted time. An EP of 21 minutes and zero fat, Sorcery Of The Damned is a blunt-force trauma exercise in old-world death metal stylings and a reminder that even as over-played as it is, there is still much love to be found in this style.

A definite highlight comes in the groove-heavy second track “Primeval Flame”, sharing parts equal Slugathor and even Bolt Thrower in its immense thickness of sound and ready touches of atmosphere. The expected nods to the likes of early 90s Morbid Angel and Suffocation are both here and as much a part of the band’s sound as the previously mentioned influences, especially on spectacularly fierce closer “Endarkenment”.

Admittedly this isn’t a release that aims to reinvent the wheel or really even refine it, and with only three real songs is only a taste of what the band may hold ones it produces a proper full length. As a means of introduction, however, it’s a solid (if small) piece of work that shows a great deal of care for the history and feel of the genre and will likely mean for exceptional badassery in the future. This one will likely be difficult to get your hands on but by all means, don’t let it slip by.