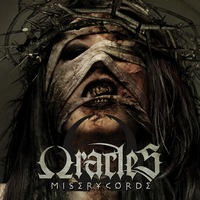 Going back to 2009-2010, there was a rising band that combined the seething vocal display of Sven de Caluwé (Aborted) with female vocals (Miri Milman) and a modern edge that blurred lines between death metal, metalcore, and symphonic metal. That band was System Divide, and fall-out between Milman and de Caluwé almost caused its demise. Almost. Reborn with what is now 3/5 of Aborted, Steve Miller, and new female vocalist Sanna Salou, the band was re-branded Oracles. Miserycorde has been long in the making, but the final product is more than worth the wait.

Taking the template from what System Divide accomplished, Miserycorde ups the ante and further diversifies itself. It deftly merges groove-laden death metal, elements of melodic death, symphonic metal, symphonic metal and more into a distinctly modern package. The true joy of the album is how the music can switch between relentless and thrashy melodeath riffing, stop on a dime, and succinctly move into atmospheric and ethereal soundscapes. The album’s arguably stongest cut, “S(k)in,” has to have one of the most fun melodeath riffs since Soilwork’s “Needlefeast,” yet also pulls out a thunderous breakdown that can stand toe-to-toe with the heaviest of death metal acts, and then spirals into a melodic yet technical solo. A real treat to hear.

“Body of Ineptitude” showcases just how visceral the band can be (and features a showstopper of a solo from Jeff Loomis), and adds powerful symphonic sections with Salou’s soaring vocals to create a sense of balance. The only real pause from the chaos comes with “Remnants Echo,” which is Salou’s shot to really showcase her soaring vocal talents (de Caluwé sits this one out), as the song moves from piano and symphonics to an elevated and crunchy mid-tempo riff that allows it to eschew traditional ballad territory. There’s even a cover of Marilyn Manson’s “The Beautiful People” that introduces blast beats, death growls, and a heavy bottom-end to bring about a new twist to the track. It’s the type of album that you can find several truly great moments and wax on about each individual track.

While bands combining death metal brutality with female vocals is far from a new concept – the twists, turns, and flat-out diversity that makes up Miserycorde is what makes it such a strong album, beginning to end. Heavy death metal grooves, Sven de Caluwé’s trademark snarls and Sanna Salou’s beautiful female vocals, hard-hitting melodic death metal riffing, frenetic solos (including a few high profile guest rippers), and grandiose epic/industrial atmosphere – what’s not to like? Oracles have crafted a splendidly malevolent gem with Miserycorde, and easily one of the strongest efforts of 2016 so far.