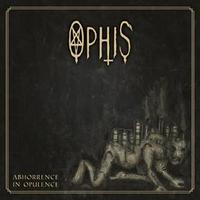 Quite the nice find by Cyclone Empire, Ophis being something along the lines of a German death/doom revelation, done with the care of those treasured early 90s days. Abhorrence in Opulence is the band’s third go-round, purveying crystal-clear sonics, along with veritable dirges to the depths that tread carefully funeral lines, but encases a melodic edge that tops off the album’s five, full-bodied cuts in a way that is both subtle and sublime…at times. But really, if there’s a band alongside Ahab who are the next step up from the funeral doom doldrums, it’s these guys.

The album’s stately, but thoroughly dreary opener “Disquisition of the Burning” is merely a precursor to what is clearly the best song of the bunch, “Among the Falling Stones.” Garnished with a slow, almost methodical main riff, the song eventually tilts the pendulum in dramatic fashion toward its finale, where upon the listener is greeted with diabolically depressing violins. A nice touch indeed. Beyond that, the fluid melodies that are tossed around on “A Waltz Perverse” add another dimension to the bag ‘o tricks Ophis employs, especially on this little number, where the band’s tried-and-true death metal side gets some much-deserved air-time.

Further trips to desolation-ville include “Somnolent Despondency,” where a creaking, yet melodic guitar line is met with desperate moans and whispers, thus only adding to the band’s penchant for sounding bleak without sounding contrived. And closing matters out, “Ressurectum” basks in some surprising black metal shrieks, all the while maintaining the general ebb and flow that was kick-started at the album’s onset.

Long songs here, some of which may benefit from being chopped in half for those without marathon attention spans, but no matter, as Abhorrence in Opulence is pretty thorough and exacting stuff in this realm. Ophis should be able to sneak up on some folks, particularly in that small little niche which finds worth in bands capable of explore all sides of death metal’s darker, non-traditional paths.