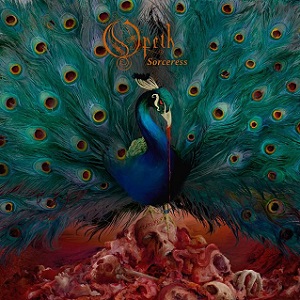 If Heritage and Pale Communion didn’t totally close the door on Opeth’s unprecedented progressive death metal run, then Sorceress is the emphatic slam shut. Main dude Mikael Åkerfeldt had generated some interest and/or false hope in the album’s direction by hinting it would be heavier, but Opeth’s definition of heavy circa 2016 isn’t quite the same as it was a decade ago. Yeah, Sorceress has more in its sonic britches than its two predecessors, but fundamentally, Opeth are still sailing the same ‘70s-loving, devoid-of-growls ship. Take it or leave it.

Perhaps less meandering than Pale Communion, Sorceress puts its balls on display with the title track, the album’s first proper cut. Sure, keyboardist Joakim Svalberg gets in his Fender Rhodes action, but it’s the straightforward lurch of the song’s main riffs that does the trick. Åkerfeldt (in full clean vocal mode, of course) is on point here, too, draping the song with his smooth delivery. Lead guitarist Fredrik Åkesson is an absolute beacon on the winding prog volleys of “The Wilde Flowers,” while “Will o the Wisp” is a fertile, Jethro Tull-styled acoustic jam, full of lively, if not poppy melodies that when suited with the band’s current direction, is of worth for its amiable nature.

The album’s restrained, contemplative, touchy-feely cuts don’t have much of an impact (“Chrysalis” a prime example), while the half soft/half rocked-out “Strange Brew” perhaps takes too long to get in gear. Yet, Sorceress still comes across as the least forced of the three ‘new direction’ Opeth albums, providing a wide working canvas of subtlety, prog hues and clues, and the domineering presence of Åkerfeldt, who has more guts than we give him credit for. A standard, fan appeasing Opeth album would feel contrived. Sorceress is anything but.