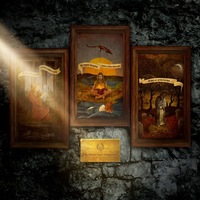 Perhaps the best place to begin is with the end credits, this newest opus from Opeth reflecting something the band hasn’t shown since Morningrise – all of the songs are co-written by another member of the band. In this case, of course, by the ever vigilant and now second-longest tenured member of the band, bassist Martin Mendez. Before even getting into the music itself this says a great deal about the dynamic of the band and likely of Åkerfelt, someone comfortable enough in his bandmates to no longer feel it necessary to shoulder the burden of creation alone. Quite frankly the results are kind of stunning on Pale Communion. A further evolution of the path of Heritage (though really, sewn long ago), those still pining for the infusion of growls and death metal peddling (or for whatever reason, the returning to the Morningrise era) will find more reasons to continue on in their disappointment. For the rest of us, magic awaits.

Because here straight up prog-rock is exactly what Pale Communion is. While Heritage was soaked in folkish asides and down-tempo jazz aesthetics this is a much more visceral and upbeat beast. Exemplified readily within the opening seconds of “Eternal Rains Will Come”, beginning with an off-kilter exploration of rhythm before giving way to a spectacular display of vocal and musical melody as the song slides into proper form. Melody is (with something to be mentioned later) the primary locus upon which the album revolves and is throughout the foremost avenue of expression and exposure. Keys, moreso than any Opeth release previously, features to this end in a central role as much as the guitars do, both as a thread within the musical fabric or as a voice of focus (which there are many spotlights). Axenrot is a force of nature behind the kit, his jazz-heavy deliver from Heritage upped exponentially as he dances within and beyond the confines of each song. That leaves then, the other and most prominent anchor upon which the music rests: Mendez. Though always fairly featured in mixes and within the writing, he upped his game on Heritage and truly shines here. Though he’s bereft of any solo space he more than makes up for it, being the true point of cohesion from which all the other instruments rise and fall. Always active and vibrant, he’s honestly a giddy joy to listen throughout.

All that being said, the guitars are still very much present and this is still very much an Opeth record. Whether in the focus on riffery and the showcasing of soloing that initial single/most straight forward “Cusp Of Eternity” or in the luscious use of acoustics in Damnation-throwback “Elysian Woes”. The light and dark dynamics that have long been a staple of the band are still very much in play there, just focused differently. Whether voiced through rhythm or lead the guitars flow in and out of focus, a lot like every other instrument (including vocals), and nowhere are the transitions of light and dark more prevalent than on the album’s longest work “Moon Above, Sun Below”. Very 70s feels in both the quiet and the loud ebb and flow till they give way to one of the best melodic expressions the band has ever put forth. Say what you want about the band’s post-Watershed direction, but not sounding Opeth enough is not one of its faults.

It’s at once a surprisingly breezy and dense listen, especially in the more experimental second half. Whether with the oppressively melancholy closer “Faith In Others” (and its supplemental use of strings) or multi-faceted and mostly instrumental jam of “River”, there’s a lot to welcome the listener upon first listen and even more to uncover with repeat listens. This is going to come across as something of a contradiction given the inherent love letter this album is to the 70s prog era but realistically, within their own work, Opeth has never been a band particularly keen on looking back and staying still. Throughout its near-hour run time Pale Communion never really explores the same idea more than once, each song a different manifestation of some overreaching whole yet sequenced in such a way to feel seamless in its flow.

For those that long for a return to older days, may peace find you for Opeth has moved on to another level entirely with Pale Communion.