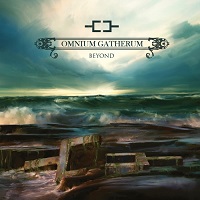 Omnium Gatherum are now six albums in and they have truly perfected the style of melo-death on the Beyond. This new release is riveting, sticking closely to their trademark sound of atmosphere, aggression, and clarity, breathing new life into the genre. Much like their last studio effort (New World Shadows), I find the collection of tracks on this release adhering to the same high level of soaring riffs and tasteful harmonies…so this is a worthy successor.

Beyond opens with a moody instrumental number, then blossoms into life on the proceeding track. “The New Dynamic” sets the tone straight away with a myriad of fast paced riffs at the start of it and then flourishing into a cross of Euro-power synths and keys. The next track “In the Rim” relies on thrashy riffs reminiscent of Dark Tranquillity, but you have to brace yourself for the doom-like pacing and chugging intensity of “Nightwalkers.” This is arguably my favorite track of the bunch and the eight minutes comprising the song go by quick. Following this standout track, Jukka Pelkonen’s low register growls take center stage on “Formidable” and he quickly switches to clean vocals on “Who Can Say,” proving his versatility as a singer.

Ultimately, there really isn’t a bad track to be found here. The strength of guitarists Joonas Koto and Markus Vanhala are the glue to keeping this thing together. The bridging of rhythms and leads come at you in massive tidal waves, akin to the frenetic chaos of classic thrash. I can’t say enough about the procession of sound to be heard on this release and they cap this off beautifully in the last track ‘WhitePalace.” The ten minute plus track eclipses some brilliant guitar work and heavy atmosphere to full effect, while providing a touch of progressiveness into the mix. This track is an appropriate selection to close out Beyond and I applaud the band for saving the best for last.

Omnium Gatherum continues to blaze a perfected trail through the melo-death genre and surely they are at the top of heap of Finnish bands employing the style. Do I dare say this is an early candidate for album of the year, well I truly believe this to be the case.