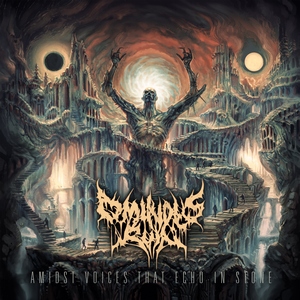 Much of the technical stuff nowadays seems to be a bit much – too much focus on attempting to be over the top with songwriting and forgetting that death metal is supposed to be brutal. For their first full-length, Ominous Ruin does a good job of balancing the two very important sides of the coin. There’s some dizzying guitarwork to be had, but never at the expense of giving the listener a good beating.

It’s in that middle ground that Ominous Ruin lies, and the format is exceptional. You can hear the influences of the current tech-death generation at hand, particularly at the more frenetic speeds the band plays at (see the opening of “A Feast for Shadows”) and some comparisons could be drawn towards an act like Inanimate Existence here. But other moments are far more brutal in tone, if one were looking for a comparison here it would be more akin to Defeated Sanity, and the band can rumble out some massive riffs (see “Consumed”). The grooves are palpable on “Deception,” and it gives the music something else to stand out in addition to the riff-wizardry (as such, the band doesn’t use either as a crutch). The vocals make the music an even more brutal affair, with some solid lows that skirt the boundary of gurgling, and some occasional highs, adding in an extra piece for the bludgeoning. Some songs have some atmospheric sections to them as well, which offers a nice change-up from the otherwise pounding energy that radiates from the tracks, and work well as a slight breather, or opening builder for “Simulacra” and “Labyrinthine Torment.”

Brutal and intelligent in design, Amidst Voices that Echo in Stone conveys a bright future for Ominous Ruin. It checks off all the boxes that you’d hope for in a release like this with glee, and allows for an experience that’s worth returning to.