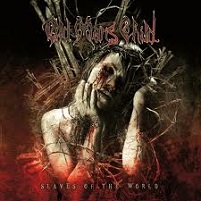 about your momentum killers…) lead guitarist Galder returns with the seventh Old Man’s Child album in the form of Slaves of the World. Way better (we’re talking

leaps and bounds) than 2005’s rather ho-hum Vermin, Slaves of the World sees the bald-headed one team up with drum maestro Peter Wildoer (Darkane, Pestilence) for an exercise

in picture-perfect black thrash metal. And it’s a killer.

The thrash angle on this thing is very pervasive, as Galder peels off about a dozen or so would-be thrash world-beater riffs, melded seamlessly with traditional black metal undertones. The lead title track is proof of this, seeing the duo lock horns in a dual between the quasi thrash genius of Dimmu’s early 00’s output and the spiraling cyber-thrash of Darkane.

In fact, the combo of Galder and Wildoer seems perfectly suited for each other, just reference the jungle-gym riff flurry at the 1:56 mark on “Saviours of Doom” and the opening strands of “On the Devil’s Throne.” However, the real riff-o-rama happens on “Ferden Mot Fienden’s Land” at the 4:36 mark where the duo hook up once again for one of the best riff/drum synopations of the year.

“The Crimson Meadows” would sound very much at home

on say, In Sorte Diaboli (love those opening keys), while “Unholy Foreign Crusade” (more Dimmu – the keys do it again!) and “The Spawn of Lost Creation” sees OMC dole out some rather impressive melodies that compliment the rigid riffing.

this scribe “pleasantly surprised” as to how dominating and engagingSlaves of the World is. Without question, OMC’s finest hour, Galder would be wise to lean on Wildoer and those to-die-for thrash riffs, ones that shine almost as much as the man’s bald dome.