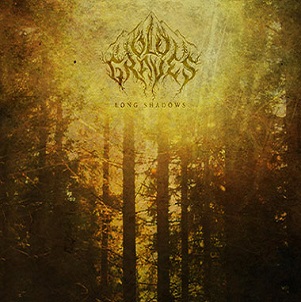 On paper, Old Graves appear to be nothing more than your standard-issue one-man black metal band. DR has subsequently lost track of how many of these have come down the pike since this site became active in 2013, or better yet, from our Blistering.com predecessor, but, they’re easy to spot: Lonely dude gets urge to do it all himself, goes under a pseudonym, makes a predictable racket, and off we go. The format has really been run into the ground and will continue to proceed as such, but leave it up to someone like Old Graves to temporarily change the narrative.

The product of multi-instrumentalist Colby Hink (what a second – that’s not a black metal name!), Old Graves purveys classic atmospheric black metal, rife with soaring melodies and winding song structures. Rather than bogging down the seven songs on Long Shadows (the band’s debut) with a flood of nondescript vocals, Hink saw fit to volley between songs with sparse vocals, and instrumental tunes. It works like a charm. Hink’s temperament is almost reserved at times, as his songs have a tendency to meander along, only occasionally catching a skirt of extremity. However, the captivating “To Die, or Bear the Burden of Death” and “Teeth Pulled from Gnashing Jaws” (the album high point) have enough gusto and persuasion to make a believer out of almost anybody.

Hink’s vocals—underused and buried in the mix—have virtually no impact here, which makes this scribe wonder if going the all-instrumental route would ever be an option. But let’s not hem and haw here; Long Shadows is a valuable commodity for its strident nature and utter lack of pretension. It makes sense – Old Graves hail from Canada.