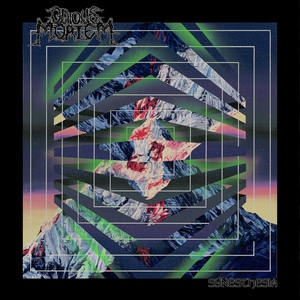 As the death metal community continues to rage on further into the depths of extremity, going in more tech-riddled or old school worshipping forms, it’s nice to have those bands that have been ‘away’ for a while return and just dole out an asskicker of a performance. Such is the case for Odious Mortem’s third effort, which is their first release since 2007. Furious death metal done all in favor of praising the almighty brutality, with just enough intricacy to it to add an extra punch.

While death metal fans of today may not be completely familiar with Odious Mortem, their work in the ‘00s was quite favorable stuff for death metal fans who enjoyed that Suffocation-level of technicality within their material. The bulk of the band was also in Decrepit Birth for some time as well, so you can be assured that this release comes with a degree of reverence for those who remember the players at hand. That said, Synesthesia picks things up with a similar formatting and songwriting ability to it. OM aren’t exactly all about pushing down the accelerator from beginning to end, and their tech-infusions often work to enhance, rather than simply dominate the playing field. It makes for some very listenable, and sometimes strikingly melodic, material that isn’t afraid to get bodies in motion. “In Abominable Form” has some catchy leadwork to it, and tosses some nice switches between grooves and blasting speed in between. Some neo-classical stuff is also present, most evident in “Synchronicity” for sure, and the build-up and execution of the heavier end is admirable here. There’s also a lot of ‘meat on the bones’ so to speak – the production is more raw sounding and the music feels more life-like than much of the clinical tech-y tropes many wander in today.

While it may be true that Odious Mortem aren’t doing anything out of the ordinary, it also is worth noting how exceptionally well built Synesthesia is as a whole. It’s a case where the experience of the band at hand allows them to really craft an experience that stands out among the pack. Odious Mortem know just how to utilize melody and technicality without sacrificing the extremity needed for this type of release.