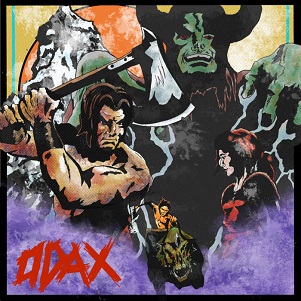 A hereby sword-wielding, melody-tinged metal body of work, Odax is the product of former Dead Rhetoric scribe and multi-instrumentalist Daniel Keating, who, along with Nick Raykovich (vocals) and Chris Haller (guitars) unite in Odax. A DIY, but totally pro effort all the way through, Odax’s self-titled debut benefits not only from accompanying visuals (the band even created a map of the fictitious “Hyrethrone” where the album’s story takes place), but compact, if not proto-metal-leaning cuts, the joint union of Thin Lizzy and NWOBHM.

Raykovich, who would pass as a Brit if the band didn’t note Seattle as its homebase, has sort of a gallant, dignified approach to his vocals. He’s not going to reach for the rafters like you think he would; rather, he’s hanging around in the pocket, giving grace and a level of ease to the chorus choices on “Yaroslav” and “Horn of Odax,” the latter of which finds him soaring through the arrow-filled skies rather seamlessly.

A good chunk of these tunes fall into mid-paced territory, often led by Raykovich’s vocal heaves and smart, airy riffing touched by keyboards and the occasional female vocal interlude. We’ll point to the rather impactful “Barbarian Steel” as the album’s number of choice, a vengeful, dungeon-prowling cut that would be ripe for the taking across the pond, in front of crowds who live for metal of this variety.

Instantly identifiable, if not separatist metal, Odax present a full-on front of classy metal that works its way around clichés, instead, letting one’s imagination run wild. The songs are certainly there; so is the concept, meaning, this is the total package, performed admirably and to be listened to with full immersion.