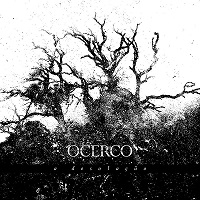 Ocerco is a Portuguese troupe playing a firebrand, if not malevolent form of what us Yanks call “Cascadian black metal.” The familiar refrains from Woods in the Throne Room and Ash Borer litter the band’s three song A Desolação EP, their second overall. Fully capable of strung-out, BM ruckus numbers, Ocerco may not be a fully-realized entity on the present time, yet these three cuts are obtuse enough to roll down plenty of desolate BM pathways.

Easy to rally behind the trance-inducing “O Colapso,” a song that is textured and dexterous at once, perhaps best slung into the difficult, abyss-laden throes of black metal’s more caustic underbelly. The elongated, fertile rush that is found on the EP’s title track, “A Desolação” (which is also the best number of the three) demonstrates some much-needed character from Ocerco, who would be wise to explore such desirable terrain when a full-length emerges.

Nevertheless, A Desolação is made up of three full-bodied, swirling cuts. And for a band from Portugal taking cues from North American bands, there’s little to squabble about.