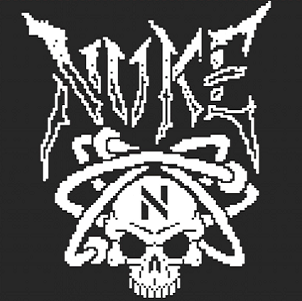 No brains needed for this one, as Nuke fancies themselves as “ugly dudes” playing metal from an “ugly” city, otherwise known as Detroit. Hey, at least Detroit is catching more heat than Cleveland these days. (Hell’s Headbangers headquarters are located not too far from Cleveland, by the way.) At any rate, Nuke is comprised of a bunch of Motor City scene vets, with the time-honored goal of creating of old-school, quasi-raunchy punk-on-thrash. On their self-titled debut, consider it mission accomplished, although it’s not quite the remarkable achievement.

Lots of in-and-out tunes, none of which are prone to any foolin’ around. This, of course, is all rooted in the early thrash ethos: you make your point quickly, then ride it home for about three or four minutes. Nuke does that fairly well, boasting a healthy dose of Exodus and DRI-inspired bits, the most notable coming to the fore on “Metal Inferno,” “Dead Space,” and “Flame of Desire,” a number that could cause some crowd sing-a-long ruckus action. And vocalist Richie Riot sounds like he skipped rehearsals altogether; showing up in the studio a bit haggard, tattered lyric sheet in hand, barely able to stay on top of the songs. Quite fitting, actually.

In all, pretty obvious, but enjoyable stuff from Nuke. Somewhat curiously, their best moment is saved for the last via “Murder Troops,” a Motorhead-like rumbler that barrels down the crossover freeway like nobody’s business. And as we noted, no splitting hairs with this, which sort of par for the course with a lot of bands on Hell’s Headbangers. It makes Nuke and their approach all the more fitting.