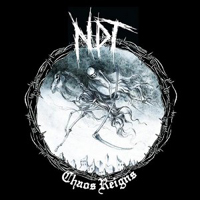 The Danish entry into the d-beat, crust-metal field, Nuclear Death Terror (such a thrash metal name) do their best job at blending in on Chaos Reigns. A compilation of ten songs from the band’s various vinyl releases, Chaos Reigns has limited range and even more limited ideas, but that’s the approach to take when you’re operating in a crowded field with several like-minded bands. Really, there’s only thing to do if you’re a band like Nuclear Death Terror – put your head down and rage.

More metal than they’re probably given credit for, NDT find the sweet spot between Bolt Thrower’s war thump and the seminal crust of Amebix and of course, Discharge. When the floodgates open on “Crisis,” it’s time to batten down the proverbial hatches, for Chaos Reigns doesn’t let up. Granted, it’s not supposed to, so we’re treated to variations of the same theme that fellow Southern Lord acts Wolfbrigade, Martyrdod, Enabler, and Heartless have trotted over the last 12 months. Coincidence? Probably not. Southern Lord is probably trying to corner the market for crusty and grindy death metal.

Naturally, the best song of the lot is a cover of Celtic Frost’s seminal “Morbid Tales,” which is infinitely more gnashed and gashed than Tom G. Warrior even imagined. Yet the fact these lads are from Denmark doesn’t sweeten deal

for Chaos Reigns, even if they are from a country that tends lean on the pristine and clean side of metal. Of course, there’s nothing remotely clean or crystalline about Chaos Reigns. It’s about as dirty as a truck stop toilet, and as nasty as those who inhibit them. That only gets you so far, mind you.