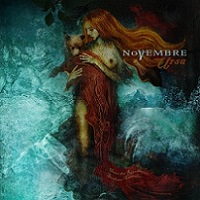 Held in high regard for a plethora of reasons, namely, their status as the Italian Opeth, or better yet, just as a high-character, top-notch atmospheric/progressive outfit, Novembre has returned after a nine-year layoff with Ursa. Mainman Carmelo Orlando has a reconfigured lineup behind him (long-time drummer Giuseppe Orlando departed last year), yet the results remain largely the same, with Novembre churning out another misty, occasionally wisty batch of songs. And in a landscape where making the differentiation between one act and the next has become increasingly difficult, Novembre has retained their singular edge.

Perhaps the only tightrope to walk with Novembre is Orlando’s vocals. His growls remain standard but imposing. His clean vocals, however, easily stroll into acquired taste territory. He’s prone to a good moan more often than not, sounding less like the despondent Aaron Stainthorpe, and more like he’s trying to fill dead air. Once past that, it’s a clear path with many of these jams, most notably, “Umana,” the first song released in anticipation of the album’s release. A deep, peddling number that ascends to upper rungs once the band’s trademark melodic guitar work take holds, “Umana” also weaves in some fantastic voiceovers. The heartfelt urgency felt on “Australis,” and careful pangs of “Easter” are suitably serene, demonstrating the above-mentioned unique touch Novembre puts on its song.

A guest spot from Bloodbath/Katatonia guitarist Anders Nystrom lends a guitar solo on “Annoluce” (not surprisingly, the song has a Brave Murder Day-like spring), while the towering “Agathae” and “Fin” find Orlando and company working with adventurous arrangements and Goth touches. To that point, Ursa finds Novembre treading the fine line between progressive and all-out Goth, with the results showing the band somewhere between the two. But, Ursa is a winner, much in the same way the unbeatable Classica (1999) and Novemberine Waltz (2000) were. And we’d be remiss if we didn’t mention how great those two albums are. Start from there, and work your way up…