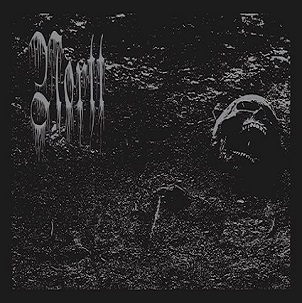 The namesake band of Danish musician Nortt, Nortt purveys the sort of chamber, barely-there funeral doom that moves as slowly as you would imagine, if only to move even slower when the mood is right, er, wrong, er, melancholic. Endeligt, the band’s first album in ten years, is a total drop into the ceaseless void, wherever it may be, although our guess is the dark, unforgiving terrain of the Danish wilderness, which could be where Nortt (the man) decides to take up residence.

The trick lies within the production values, where the drums are placed way, way back in the mix. They’re more like imperial tom thunders than actual snare hits if you catch our drift, slowly setting the pace for cuts like “Lovsang til mørket,” “Eftermæle,” and in particular, “Afdø,” which if we were to tag a song with the most value, that would be it. Nortt will oftentimes dot these songs with a minimal keyboard placement or marching doom riff (like on “Afdø”), but for the most part, these songs are akin to being lost in a dense forest, blanketed in snow, trying to clear the pass to find something, only when you do, it’s a harrowing discovery.

Would-be visuals aside, Endeligt is hardly satisfying, but it’s cloaked in allure and forbearance, the type of album that takes careful crafting to create but requires mounds of patience to grasp. And to fully pinpoint it, Endeligt is that next abyssal step below modern funeral doom, the complete and final plunge into spaces that few would dare venture into.