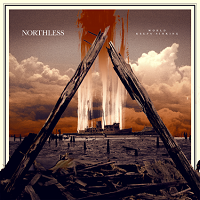 World Keeps Sinking, the third full-length album from Milwaukee moshers Northless, is a polished and crushing effort that sees the foursome blur the lines of sludge, doom and progressive metal in a way that seems effortless and fresh, yet still pays homage to its predecessors. Influenced by trailblazers such as Neurosis and Godflesh, Northless paints a canvas of sheer brutality and despair, relying on fuzzy guitars, deep bass grooves and pummeling drums to bludgeon the listener into submission.

Guitarist/Vocalist Eric Stenglein originally formed the band in 2007 as a guitar-and-drum duo, but over the years, and in between several releases, the lineup now consists of drummer John Gleisner, bassist Jerry Hauppa, guitarist Nicholas Elert and the aforementioned frontman.

The album’s eight tracks sprawl over 60 minutes, with some edging into Tool territory with their expansiveness. The meat of the album lies within the middle tracks, “Communion” and “Passage.” Together, the two songs comprise almost half of the album’s runtime, the latter opening with a beautiful, light dance between the guitars before the rhythm section blasts in with the furious indifference of a Lake Michigan blizzard.

Stenglein’s vocals are rough and bleak, matching the lyrical content and brutality of the overall theme. But the band knows when to call the dogs off at just the right times, giving way to longer instrumental interludes that allow the listener to gasp for breath before the sonic assault continues. The album’s production is much more polished and crisp than on previous efforts, allowing for each instrument to stand out on its own, and you can really feel the different guitar textures and tones throughout each track.

World Keeps Sinking is not for the faint of heart. It’s a stomach punch of an album. Over the years, Northless have steadily trudged forward in the direction of Stenglein’s vision – a grim and cold one at that –and they don’t seem to be slowing down anytime soon.