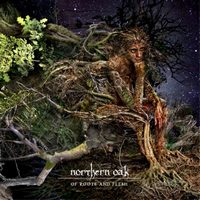 Hailing from the same town as Def Leppard, Sheffield, UK’s Northern Oak went the crowd-funding route for their third album, Of Roots and Flesh. Such a show of support for an unsigned band, relegated to basically the UK, is impressive, perhaps driving home (yet again) that bands don’t necessarily need record companies to release an album. (Their fans will pay for it!) Nevertheless, the band’s death-on-folk concoction embodies a much darker, less jovial twist than their European contemporaries, a lot of whom are more happy-happy joy-joy. Northern Oak are more serious.

The regular use of the flute (provided by Catie Williams) provides the necessary folk foundation for the 12 jams found on Of Roots and Flesh. Occasionally, you get the feeling they just plopped the flute down for the sake of having it in a song; i.e. “Marston Moor,” a song that doesn’t mesh all that well thanks to frequent stop-starts. The more uppity “The Gallows Tree” is full of dynamics and flute/violin/guitar interplay, making it the album’s most interesting cut. The title track, with its winding and driving chord structures isn’t too far behind, especially when it’s a Williams-led flute melody that gives the song its breadth and punch. (Let’s not forget about the rare appearance of clean vocals, too.)

Folk metal, even when you throw the “progressive” tag in front of it, can be a tricky ride. There’s now such a firmly-defined line of the style’s upper-crust (i.e. Eluveitie, Tyr, and now Equilibrium) that noticeable quirks like full-on, full-time flute action are needed to create some kind of distinction. Indeed the Brits are able to create such happenings across Of Roots and Flesh, but don’t expect to be wowed out of your chain mail quite yet – Northern Oak are a work in progress.