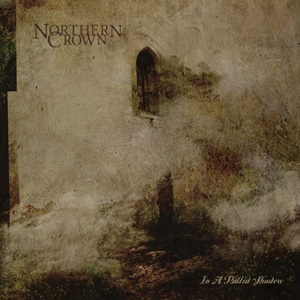 Establishing a multi-faceted sound that may be epic doom metal on the surface but also contains plenty of progressive and straight rock aspects, Northern Crown from Florida possess solid musicianship and instincts for their third full-length In a Pallid Shadow. A trio at the core (filled out with session help from drummer Dan Konopka and guest lead guitarist Evan Hensley), they’ve built a sound that contains mammoth riffs supported by potent doom grooves and magnificent vocals that can be soulful, bluesy, and titanic. The five songs for this effort contain the right amount of musical information to process in their diversity – bringing to mind aspects of Candlemass, My Dying Bride, Black Sabbath to Deep Purple, Yes, and even a bit of classic 80’s metal on the docket.

The guitar mechanics and proper organ/keyboard support Zachary Randall brings to the table makes an indelible impact on the hooks and transitions for “8 Hours” as well as opener “Leprosarium” – the latter feeding into the powerhouse Dio-esque melodies Frank Serafine deliveries from verse to chorus and back again. You’ll also get the chance to experience some beefy, progressive bass lines from Leona Hayward, taking advantage of the longer instrumental sections to offer more aural candy to treasure. The band can turn transitions into atmospheric/psychedelic gold even at slow paces – bodies swaying to “The Last Snowfall” as the 70’s-style keyboard pomp overdrive tones work against some killer cultural guitar lines. The progressive angles come out blazing on the 9:27 closer “Observing”, another epic affair featuring psychedelic keyboard flurries, guitar harmonies and acoustic transitions abound, and this outer universe ambiance that keeps interest because of the virtual listening journey that takes place. Add in the always thought-provoking cover art of Travis Smith plus equally captivating stories on the lyrical front that have personal charm next to their historical context and its easy to understand how Northern Crown are making a buzz even on their own independent accord.

In a Pallid Shadow proves that US doom can be progressive, rocking, and engaging in its own unique way.