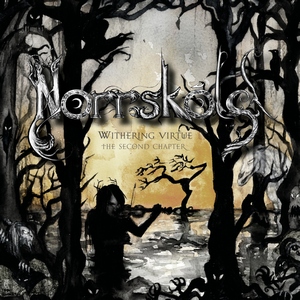 A number of bands in the last year or two have decided that modern melodic death metal is just well, too modern. Instead, bands are choosing to go back to the roots of the genre, where an almost icy feel could combine with some light folk elements and a merger of black and death metal in the utmost melodic splendor. The latest of these bands on the chopping block is that of Norrsköld, with their sophomore effort, Withering Virtue.

The early/mid ‘90s feel to Withering Virtue is both noticeable and appreciated. Some light acoustic moments, with a folky vibe set the tone early on (“Everfrozen” and “Awaken the Dead”), with some reminiscing about Lunar Strain-era In Flames, Skydancer-era Dark Tranquillity, or even shades of Dissection. The familiar hum of the production helps this nostalgic feeling as well – never getting in the way of the songs but still authentically capturing that feeling. Along with the acoustic segments, the melodies stand out well. Everything from slower and full of grandeur (“Stormgryning”) to thunderous (“Malice”) find their way into the tracks, which space themselves out nicely with use of the instrumental interludes and changes in tempo. If there’s any fault to the album, it’s that it does too good of a job revisiting this era, and doesn’t bring much new to the table that hasn’t been heard before. Admittedly, a weak argument against a strong selection of tracks.

If you long for the early days of melodic death metal, in its near folky glory, Withering Virtue feels like an album taken directly from that time zone. A keen sense for melodies and a dynamic approach in tempo bear the mark of an album that many who enjoy this style will find quite intriguing.