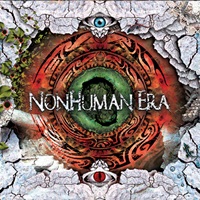 Starting in 2007 as two cousins fleshing out progressive metal ideas, drummer Rick Dessi and guitarist Carlos Zappavigna needed a few more years to gain the right membership to become NonHuman Era. Which is alright to these ears, especially when you have Heaven’s Cry vocalist/guitarist Pierre St. Jean in your ranks. Encompassing a wide array of progressive and modern metal influences, this self-titled full-length captures attention immediately and rarely loses focus and excitement even as the last chord subsides.

The first Marek Krowicki keyboard segment gives chase to a strong, heavy guitar movement for “A New Breed” – delivering immediate ear candy, while Pierre’s commanding vocal range has a confident raspy grit and soaring abilities to easily gain a lot of Matt Barlow/Russell Allen comparisons. Musically the quintet balances out the progressive interplay during a lot of the instrumental sections with spot on heaviness and more controlled verses as to keep heads bobbing, bodies swinging, and mouths set to stun. Circular riffing exists in “Elements of Chaos”, where the catchiness comes in weird building block measures for the drumming or subtle keyboard nuances – the guitars having that low end stomp that comes from a melodic death (Soilwork) meets Pantera edge.

When NonHuman Era choose to switch gears like in the ballad “Continuum”, piano play and cleaner, more restrained axe action showcases a reflective side, the band wisely executing from more of their older bluesy/AOR influences – harkening back to Dream Theater during their Images and Words breakthrough. Overall these songs sit well in a variety of sub-genres because of the attacking nature at times but also the melodic veneer – subtly creeping up as you take in the layers of action going on for “Night Bleeds into Day” or the shape shifting rhythmically driven “Hollow Point”. Topping off the package with killer Felipe Angel Quinzaños artwork and the ubiquitous Jacob Hansen mastering, you’ll get close to an hour of music and performances that could gain interest from the more commercial end of modern melodic death heads just as much as it will from the tried and true progressive crew.

Our neighbors to the north in Canada deliver once again – don’t be left out in the cold, be one of the first to jump on the NonHuman Era train as it’s an exhilarating aural ride.