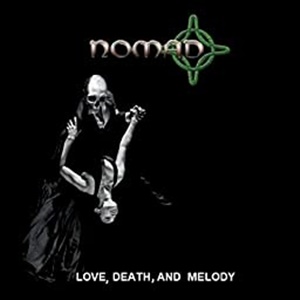 Witnessing this Connecticut act a couple of times over the years in local clubs, Nomad finally completed a full-length record for Love, Death and Melody. An extensive history dating back to the 1990’s with vocalist/guitarist Jay Mitchell the driving force – rolling through untimely deaths of previous members, record labels going bankrupt, and numerous lineup changes during the past couple of decades. Through it all, the love of original melodic heavy metal/ hard rock never wavered – and the fruits of said labor come to life in this eight-song recording.

The base foundation of Nomad sonically comes from a primal, bluesy-based crunch of the groove/ four on the floor tempo variety that contains a boatload of 70’s and 80’s influences. The guitar tandem of Mitchell and Dominic Scoppetto enjoy a mix of NWOBHM and US artists – you can tell they love early Def Leppard and Iron Maiden just as much as say Y&T, Kiss, Ratt, and Ozzy when cranking out those licks and lead breaks for opening cruise-worthy “Amped” and “Reign in Hell”. Exploring serene, melodic passages with calmer, clean guitars and slightly advanced rhythm section work delves a bit more into those overseas metal nuances, as the epic “(Where) Angels Fear to Fly” allows Jay to rear back and hit some upper echelon notes in his slightly Geddy Lee-ish vocal delivery. Alternating between the lighter and heavier arrangements song to song ensures the listener will hear all sides of Nomad – a song like “Sleepwalking” befitting its title, from part to part twisting and turning in mystery while the bluesy-based solo reaches your soul through carefully placed, building notes.

Are there times where this scribe wanted these gentlemen to maybe crank up the energy / tempo a bit, or possibly through a curve ball, loosening things up in the mix? Sure… you can tell Nomad subscribes to an older aesthetic and aural component where musicians just plugged in and played – keeping the hooks simple and the melodies easier on the listeners to encourage more active participation from a live standpoint. The Dexter’s Lab studio environment captures Love, Death and Melody as a musical portrait with plenty of footing in what rocks – solid songwriting and from the heart performances that appease those into melodic hard rock/metal.