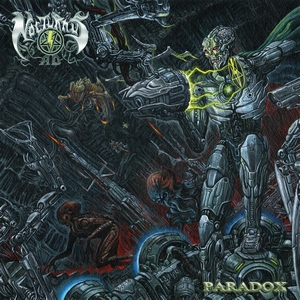 When folks talk about ‘bands before their time,’ no doubt Nocturnus is quick to be brought up. Many still rave about The Key, an album set firmly in death metal territory in 1990 but sounds remarkably in and of itself. Sure, the extremity of the material landed it in death metal but the usage of keyboards so far upfront in the mix, labyrinthine guitarwork, the sci-fi concepts, and drummer/vocalist Mike Browning’s unique vocal delivery made for an otherworldly experience. Not to mention laying the groundwork for the future.

This leads us up to Nocturnus AD. With Browning parting ways with Nocturnus in ’92 and forming After Death, we’ve now come to the merger of the two properties in Nocturnus AD, which features Browning alongside the members of After Death. Paradox, as the spiritual successor to The Key (featuring only a few tracks that link to it), does feel as if it was the next stage in the band’s evolution. In some regards, it’s as if one is taken back into the ‘90s with the same style of keyboards being utilized (lovingly so), and a production that harkens back but without being rough around the edges. It makes for a strange and wonderful trip, as tracks like “The Bandar Sign” show – Paradox in turn feels just as imaginative and unique, occupying its own space in extreme metal territory. Browning’s vocals are far from the death metal standard, with easy to discern lyrics with a bark that is rather intelligible, and again, bringing the listener away from what is the usual tropes. The most forward-thinking aspect though is left for the guitar work. Often frantic in nature, full of eerie leads or mind-bending riffs, when they combine with the synths and vocals, not to mention the sometimes militant drumwork, makes for a glorious assault on the senses. “Precession of the Equinoxes” has some moments that are flat-out bonkers, and will require a few spins to take everything in, but the nuance and atmosphere that also accompany these tracks (“Aeon of the Ancient Ones”) make it easy to want to sink some time in with the record.

With one foot in the past and one firmly locked into the present, Nocturnus AD provide an experience that rivals The Key in its execution and tone. There’s no lame rehashing of the past, just taking a sound that worked and incorporating 30 years of evolution into it to further its premise. In short, Paradox sounds exactly like long-time Nocturnus fans would hope it would – an experience that sounds like nothing else out there.