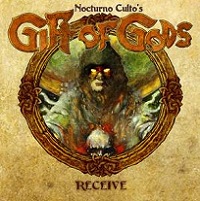 ‘Tis been a very nice year for the Darkthrone duo of Fenriz and Nocturno Culto. The year would have already been complete if they had just put out The Underground Resistance and nothing more, but here comes Nocturno Culto with his first solo foray under the Gift of Gods banner. Receive is a four-song EP, combining the various “pure”  metal elements Culto is fond of and tries to sneak into Darkthrone’s sound. Actually, “sneak” isn’t the right word – they’re rather evident in DT’s repertoire nowadays, but on Receive, they are fully exploited, resulting in a stellar listening experience.

Culto’s riffs – a lurid cross between vintage Accept and European thrash – make instant impact via “Enlightning Strikes,” a song that propels itself forward in the type of open-space, doom-channeled fashion of yore. Obviously, it’s a superb number; same for the all-instrumental title track which at first bluff, begs for vocals, but Culto keeps tacking on the riffs, most of which are total Norwegian rockers. (He even slides in a bit of a cult BM solo for good measure.) A cover of obscure 80’s band Universe works itself way into the running order seamlessly (read: it sounds like an original), while “Last Solstice” is where the man’s long kept under key doom influence shines, full of dark, but gripping power chords and his earthy bellows.

Something that no doubt has been a long time coming for Nocturno Culto (too bad we can’t pry any further – his PR folks say attempts at interviews haven been unsuccessful), Receive is superlative EP, dead set for the domineering 80’s classic metal brood, as well as the black metal onlookers who find equal enjoyment in such sounds, but are too “troo” to admit as such. Never the matter; think he can squeeze in a full-length now that Darkthrone is going to have some time off?