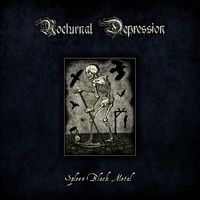 Now there’s a cool title: “Spleen Black Metal.” DR is unsure if this will develop into a new category for the always-tricky black metal, but it can never hurt to have another BM band of subsequent depth and desolation. Hailing from France, the band has been kicking around since 2004, with handful of under-the-radar albums to their credit, with the aforementioned Spleen Black Metal (their seventh overall) being their first for the mighty Avantgarde Music. And as one could surmise based on the band’s name (and even the album title), this is dire, if not proper “suicidal” black metal.

The ragged tones that fill up the album immediately place Nocturnal Depression into raw black metal territory. There’s little touch-up to the album’s recordings, yet the snap of the snare and growl of the guitars keep it out of subterranean localities. Quasi-melodic, and downturn chords are usually the band’s method of making things happen, with heightened moments popping up on “Un immense désespoir,” and the lengthy “Remords posthume.” The former is the album’s best track, though, balanced between a Shining-like (the Swedish version) chord progression, and vocal heaves of desperation. It’s almost a drab rock track, just disguised in black metal.

Certainly Spleen Black Metal does not lack for melancholic, albeit it’s represented in more ugly tones than what the black-gaze bands are up to. But the album is far from formulaic, and is varied enough to avoid some of the underpinnings of black metal. Above all else, Spleen Black Metal (and Nocturnal Depression as a whole) represent the right approach to maintaining the darker side of life in the context of extreme metal. No sunlight here, of course.