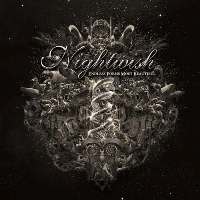 Finnish symphonic power metal masters Nightwish have been leading the scene since releasing Once in 2004, an album that brought them to worldwide acclaim on the strength of songs such as “Wish I Had An Angel” and “Nemo.” The momentum continued with 2007’s Dark Passion Play and 2011’s Imaginaerum, despite replacing longtime vocalist Tarja Turunen with the more rock-oriented Annette Olzon. It can be hard enough creating another album on par with the caliber of Dark Passion Play and Imaginaerum in itself, but introduce a few new members to the fold and it can become even more difficult to recreate that magic. That’s the challenge that Nightwish faced as they approached their latest and eighth studio album, Endless Forms Most Beautiful.

With Anette leaving the band, the search was on for a new lead singer. Enter Floor Jansen, the Dutch vocalist formerly of After Forever and currently with ReVamp. Floor wasn’t the only new addition, as Troy Donockley, featured on the last two albums, was made a full member of the band, contributing uillean pipes, tin whistle and backing vocals on the new album. And with drummer Jukka Nevalainen taking a temporary leave of absence from the band to deal with insomnia issues, Wintersun and Swallow the Sun drummer Kai Hahto stepped in.

Much like its title, which was taken from Charles Darwin’s On the Origin of Species, where he uses “endless forms most beautiful” to describe the evolution from one common ancestor to all living organisms, Endless Forms Most Beautiful is an evolution of the band’s core sound, featuring dark, gothic overtones highlighted by powerful melodies often accompanied by a bombastic orchestra and grand choirs. While new offerings such as the light-hearted “Élan,” with its playful pipe melodies, bouncing rhythms and catchy chorus (think “Amaranthe”) and the hammer of “Yours is an Empty Hope,” featuring driving guitars, thunderous bass and fast, near-double bass drumming that could be the offspring of “Master Passion Greed” and “Storytime” (especially the main riff), may resemble past works, thankfully Endless Forms expands on those ideas rather than retreads them. Endless Forms may be Nightwish’s most diverse and varied album to date. While Imaginaerum may be heavier, there’s plenty of darkness and heaviness to be found here, but beyond that this is an album brimming with emotion, often conveyed through choir chants and dark, gothic tones (see “Weak Fantasy”).

Floor’s vocal performance stands out and proves why she is the perfect fit for the band. Having been operatically trained, like Tarja, Floor can not only handle the operatic vocal parts, but she possess more dynamics and a wider range than Anette, while also injecting her own touch to the songs. The melodic medium-paced rocker “Alpenglow” is a great example of Floor’s versatility, which sees her switching back and forth seamlessly from a dark gothic tone to a more comfortable melodic range, and also immediately transitioning from a soft whisper in the final verse to a stronger, more powerful roar in the chorus. But perhaps there’s no better example of her versatility, or the band’s, than on the gargantuan five-part, 24-minute “The Greatest Show on Earth,” which closes out the album in epic fashion (think Iced Earth’s “Dante’s Inferno”). Featuring everything from a slow, dark piano intro by keyboardist and main song writer Tuomas Holopainen, sorrowful orchestral string sections and playful folk melodies, to intense guitar riffs, pummeling drums, deep but powerful vocals from Floor, choir chants, animal sound effects and spoken passages by a narrator, it’s a true showcase of the scope of the band’s sound and talent.

Endless Forms Most Beautiful is yet another shining example of why Nightwish are so highly regarded by fans and their peers in the genre and proves Tuomas and his cohorts aren’t ready to give up the symphonic power metal throne any time soon.