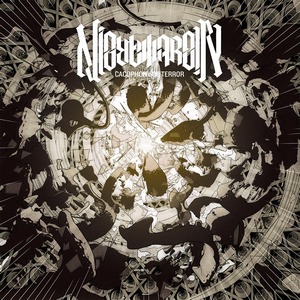 Seems like it was just yesterday when Nightmarer’s 2-track introduction, Chasm, was stumbled upon by this scribe at Bandcamp. A fresh take on the skronky and dissonant death metal scene, it was well-received, and the band has since signed to Season of Mist for their debut, Cacophony of Terror. Those seeking something that reeks of heaviness while allowing you to ponder your own existence in the void should find this to be a pleasantly unsettling record.

The atmosphere of Nightmarer is one that is bleak, oppressive, and at times otherworldy in tone. Thick and chunky guitar and bass lines rumble through the speakers, whether blastbeats are flowing (“Bleach”) or wallowing in sinister grooves or doomy lurches (“Cave Digger”). There’s a persistent heft to the material, the type that can hit you right in the gut with its monstrous tone. That heaviness, in turn, supplies a more menacing tone than some of the other bands that flock towards that Ulcerate/Gorguts feeling. When they go for the more atmospheric approach, like on “Death,” the heaviness makes it more uncomfortable, with a hint of despair. Even still, there’s an immediacy to Cacophony of Terror that is noticeable and welcomed, as is their ability to get right to the point. Tracks never reach the 5-minute mark, and still leave behind the same amount of destruction and wreckage you’d expect. There’s really never a lull in the proceedings, and it makes for a much more compelling release. Lastly, a strong and clear production gives them a sonic edge over some of their competition, where sometimes the whirlwind of chaos comes at the cost of listenability, but not here.

At points entirely malevolent and awe-inspiring in terms of pure heaviness, Nightmarer have made a full-length debut that cashes in on the promise of their earlier material. A grim and desolate vibe awaits all who seek out Cacophony of Terror.