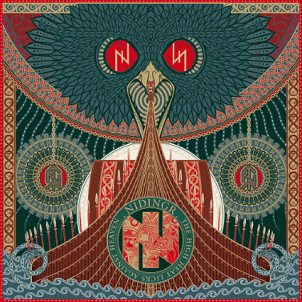 There’s a perfectly good reason Mayhem plucked guitarist Teloch from the realms of obscurity to replace master-pro Blasphemer: his riffs can twist and bend much like his predecessor. Now, evoking weird channels within the frame of black metal is nothing new, but to man the guitar spot in Mayhem (turns out the band needed two to replace Blasphemer, actually), the ability to meld, morph, and twist chords has to be performed at the utmost level. Teloch ably does such things in Mayhem, as well as in his own band, Nidingr.

The High Heat Licks Against Heaven is the band’s fourth full-length and first since 2012. While firmly entrenched in the discordant, not-easy-listening playing field of black metal, there’s a certain hum and zing to some of these cuts, namely “The Ballad of Hamther,” which finds vocalist Cpt. Estrella Grasa at his most theatrical over a hefty dose of winding riff action. The forceful attack of “Sol Taker” and the chugging, militaristic angle of “Valkyries Assemble” provide plenty of lift in the left-field black metal column, but, some of these cuts get too wrapped up in mangled-chord-ville. The experimental “Gleipnir” is a total misfire, as well as the unconvincing “Ash Yggdrasil,” two jams that find the band too enveloped in their attempts at warping the black metal spectrum.

In spite of its odd title, album closer “Naglfar Is Loosed” is the kind of song that will help black metal punters maintain their faith in Nidingr. Triumphant and battling, the song is highlighted by airy female vocals, providing just the right amount of counter-balance to an album that sometimes goes out of focus. The High Heat Licks Against Heaven has enough twists and turns to save face, although don’t be surprised if Teloch’s riff choices leave you out in the (freezing) cold.