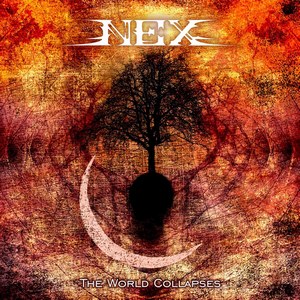 Always on the lookout for the next fix of death metal, it’s a good thing there’s never a shortage. The problem usually lies in finding something that hits all the right marks (including good songwriting) without feeling like a complete retreading of ideas. Polish newcomers Nex show they’ve got a good handle on the death metal basics with their first album, The World Collapses.

Not feeling the need to going in the blastbest competition (though they do come around with them as necessary), Nex instead relies on crafting songs that are built to last. Heavy on mid-tempo bangers and groove, The World Collapses has that timeless death metal feel down to a science. Darkened riffing is one of the highlights, with songs like “Hate” hitting the groove pedal hard to generate an ominous feel that mixes in some speedier moments to keep dynamics in check. While it does have a bit of that Polish death metal feel to it at times (a la Behemoth or Vader), they never play too far into it. Instead, they take much of their focus instead into drawing out more melodic elements without dampening the overall brutality. Songs like “God” feature some quite melodic leadwork, which lends itself nicely to the darkened atmosphere that they design. Other than the last track, “Circles,” they keep the songs to a brisk, 3-4 minute pace, where they capitalize on the momentum, allowing the catchy writing to stand out. But as a closer, “Circles” shows they can go a bit further if necessary, implementing a bit more mood and shows some potential future growth.

While it’s no revolutionary by any means, The World Collapses is well-written death metal. Nex doesn’t rely too much on speed or technical flashiness, so it falls into the purest of pure death. It’s aggressive, while still having some hooks – enough to satisfy any death metal craving.