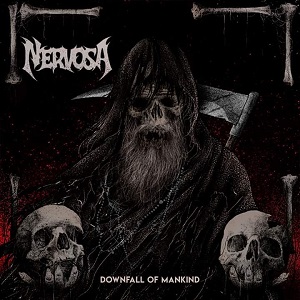 Hungry and determined to slay all through sheer vengeance, Nervosa appear destined for greatness in the new breed of thrash acts based on their previous two albums Victim of Yourself and Agony. Stabilizing the drum throne with Luana Dametto last year, the band blitzkrieg the globe on tour and then take a brief reprieve before unleashing this third outing for Downfall of Mankind. Choosing to align with sound engineer Martin Furia (who the band worked with on a previous Destruction, Enforcer, Flotsam & Jetsam tour in Europe) as a producer, these songs feature a raw, unbridled furious nature that even at varied paces grabs you by the jugular and pummels all facets of being into submission.

If anything strikes a chord for the entire record, it’s that these ladies felt the need to channel much of their social injustice and political frustrations through an extreme approach – the riffing and blast beats at times devastating in a death/grindcore aspect. Check out “Bleeding” or “Fear, Violence and Massacre” for that primal rage diffused at breakneck speeds, lightning quick finger action from guitarist Prika Amaral and the equally stunning snare/kick combinations from Luana sure to cause massive pit (or neck) damage. Bassist Fernanda Lira has this raspy, venomous roar against an equally sick screaming nature, channeling the best death, thrash, and crossover singers in the business that keeps your attention, delivering the choruses in a simple, rhythmic manner to embed themselves easily into that brain of yours. The crossover uppity thrash side comes into play when hearing the triplet action for “Conflict” as well as “…And Justice For Whom?” – but the band never stay stagnant even in their blistering fast compositions, as “Horrordome” gets the album going on the right adrenaline-oriented note, the half-time break allowing Prika to use a whammy bar Slayer-lead approach and Fernanda to emphasize her solid bass playing delivery.

The band sprinkle in some political sound clips (Martin Luther King most notable) for the start of “Raise Your Fist”, and they also continue their native language tradition for “Cultura do Estupro” – plus the bonus track “Selfish Battle” is more of a traditional riffing affair with Fernanda stretching some of her clean melodic chops that are remarkably strong and could offer that extra edge for diversity’s sake. Third albums usually set the tone for a band’s longevity – Nervosa have nothing to worry about, as Downfall of Mankind has that right thrash angst and extreme approach that their followers crave.