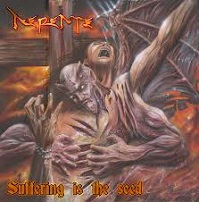 Can’t fault a person for looking at the name Nepente and getting it confused with the Sentenced song “Nepenthe.” The only thing missing is an “h,” along with the rather noticeable distinction that “Nepenthe” is not only the sorely, sorely-missed Finns’ best song, but one of the best metal songs of all time (don’t doubt it for a second). Once beyond that, Columbia’s Nepente emerge as an off-the-rails brutal death metal band, definitely European sounding, even razing some spitfire black metal to mix things up on their sophomore effort, Suffering is the Seed.

The band jumps into the vat of sulphuric death metal acid without flinching, parlaying a demented, uncontrolled sound that gives at least some partial nods to neighbors Krisiun. Drummer Mauricio Aristizabal apparently has only one task in the band, and that is to blast with reckless abandon, thus showing up his bandmates on the title track and “Slaves Will Always Be Slaves.” This utter disregard for structure and control, while adhering to fuck-all extremity is what gives Suffering is the Seed that extra little flavor to separate itself from some of the brutal throng. And so amidst the very obvious volatility in which Nepente operate, comes some minor chord scraping on “Merciful Death,” recalling the days in which Dissection were just starting to get their bearings, and Naglfar was worth giving two cents about.

Make no mistake – Suffering is the Seed burns itself out rather quickly, for the band is unable to work past their obvious limitations. Yet, the unabashed brutality, face-peeling riffs, and machine gun drums create a ripple, when upon first glance Nepente translated to nothing more than an ignored proxy of Krisiun and Morbid Angel.