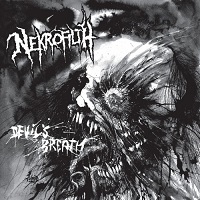 On the refreshing side to hear this kind of snot-nosed, rabid death/thrash; it pretty much goes like Nekrofilth are around to be partially disgusting, maybe offensive, but certainly comedic. There’s nothing inherently wrong with that – it’s why so many people think GG Allin is still cool, but no one thinks Marilyn Manson is cool because it’s processed and contrived. Obviously, there’s nothing remotely contrived about something like Devil’s Breath, which is this Cleveland-based trio’s debut effort.

In and around the area of crossover thrash, Nekrofilth don’t have to do a whole lot to get their point across, as those caked-in-dirt (or feces) riffs get going with little push needed. Then you tie in some vitriolic/cartoonish vocals from Zack Rose, and it’s a rather engaging, but not-so-slick concoction. Of course, there’s a seriously short shelf-life to most of these tunes, so one needs to be ready for a jolt (and partial chuckle) when the jagged barbs of “Scum Freak,” “Death Rush” and album standout “Junkie Cunt,” which will probably emerge as the band’s staple song. There’s no way it can’t; who doesn’t want to chant “Junkie cunt!” Well, maybe not all members of the female persuasion…

One can see the slight novelty aspect to a band like Nekrofilth, but they are who they say they are, that’s a given. As such, Devil’s Breath is a rather mean and lean album, capable of getting a raise out of the squares, while filling a much-needed void for purposely foul metal.