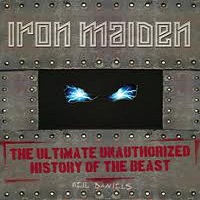 The “unauthorized” tag is usually cause for concern, but it shouldn’t be in this instance. Britain-based author Neil Daniels has clearly done his share of Internet sleuthing and research to pull together Iron Maiden: The Ultimate Unauthorized History of the Beast, and while it skips out on some of the very granular details (i.e. the various departures of Di’Anno, Burr, Dickinson, Smith, and Bayley), it’s a quality tome, with scores of eye-catching pictures to boot. Methinks no one will ever tire of seeing fencing outfits, resident Maiden goofball Nicko McBrain, and some frolicking around with ‘ole Eddie…

Daniels takes us through the formative years, when Steve Harris introduced his legendary work ethic and willingness to go against the tide, which in the mid-to-late 70’s, was punk. The scrappy Di’anno years were fun while they lasted until Di’anno’s unprofessional ways (and reported drinking and drug habits) gave him the boot, which allowed Dickinson to enter the fold. There’s nothing too revealing about Maiden’s glory years (’82 – ’88), with the only real nugget being that ‘ole Bruce wanted Somewhere In Time to be an all-acoustic album rather than a traditional 8-song outing. Obviously, he was shot down.

The skimming over of Maiden’s gradual decline in the early 90’s is perhaps the book’s only real flaw, with little focus on how disinterested Dickinson was prior to his departure in ‘93 (anyone who has watched live footage from that time period can validate this). Daniels does do a good job of hitting upon the ill-fated Blaze Bayley era, which frankly, seems like eons ago. As the biggest blip in Maiden’s history, Bayley was never quite accepted by the Maiden fanbase, making the resultant return of Dickinson and Smith in early 1999 a reunion of epic proportions.

Reviews of each Maiden album are provided by some rather high-class writers such as Martin Popoff, Ian Christie, and Mick Wall, while the inclusion various tour dates, setlists, and live shots help punctuate Maiden’s relentless touring schedule. In all, Daniels has crafted a very high-level and easy read with Iron Maiden – The Ultimate Unauthorized History of the Beast, and top it all off, it’s packaged expertly, prime for your coffee table, where Eddie’s piercing eyes await.