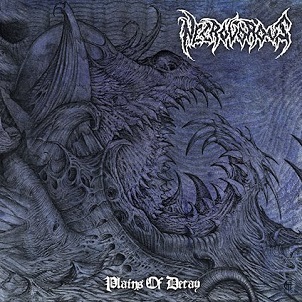 Necrovorous has a 2006 demo entitled Revenge of the Booger. Now, juvenile humor has never fully been out of view in death metal. After all, the style was founded upon semi-comedic tales of zombies, splatter, gore, death, et al, but, using the congenial term for dried nasal mucus is stretching it a bit. The Greeks matured enough to the point where the always-reliable Dark Descent took a flier on them for the release of Plains of Decay, their second full-length.

Vintage, sloppy and riled-up old-school death metal is the calling card here, with Necrovorous citing the usual, if not predictable array of influences. (If you need us to list them here, then revoke your metal card instantly.) What makes Plains of Decay work so well is its inherent catchiness. Boasting a steady diet of catchy, no-frills riffs, the constant attack of the album’s ten songs is infectious. Going from the whirling death of “The Sun Has Risen in a Land I No Longer See” or the searing thrash of the title track (which is easily the best number here – check out that main tremolo riff!), Necrovorous possess the innate capability to make old-school death metal sound fresh while not dropping down to total rip-off territory.

As noted above, what once appeared to be a gimmick band (two of its members go by the name of “Shit Eater” and “Pig Fucker”) has turned into a respectable, highly promising outfit. A full spread of shards of Autopsy, Bolt Thrower, Death and Massacre eventually pile into one steaming heap of vintage death metal glory on Plains of Decay.