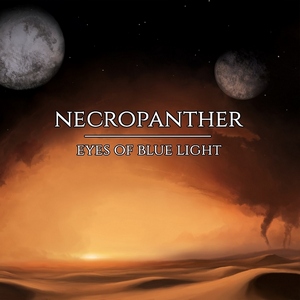 When one happens to think about the term ‘sci-fi’ metal, a more retro, thrash-oriented approach probably isn’t the first thing that comes to mind. But this is precisely where Colorado based metal act Necropanther lies. Taking their melodic death metal meets thrash metal approach, the band’s debut, Necropanther, focused on a Terminator theme. For round two, they take on the sci-fi concept of Dune.

With a lyrical concept in mind, it gives Necropanther some space to separate from the rest of the pack. Despite a focus on deeper growls and higher rasps, there’s still a sense of storytelling to the music, which relies more on the rhythm section to carry the tone. The juxtaposition between some ‘happier’ melodies and more snarling aggression are what make the album’s best moments. They can take a lighter mood to the opening of “Water of Life” and then just let everything rip when they decide the moment has come. The approach is tried and true, with other songs like “Hunter Seeker” highlighting their old school thrash meets Gothenburg approach with some stunning leadwork and melodies that sit atop an almost retro-thrash attack. The short song length is essential to the band getting their point across, and really lets the battering ram thrash feel of “House Atomics” maintain a destructive level of carnage without overplaying its hand. Many of the tracks simply jump right in, provide a moment of melody or hook to latch onto, and leave with maximum impact.

It’s all about the sweeping melodies and cutthroat thrash when it comes to Necropanther. Anyone seeking either will find Eyes of Blue Light a safe haven, and the conceptual nature gives them a little more leg room. It’s energetic, memorable, and even if it owes some debt to bands like Skeletonwitch and At the Gates, there’s no doubting that they are onto a winning formula.