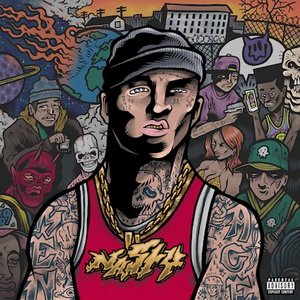 Some albums are just meant to bring about some rage and anger, or at least allow one to vent those particular emotions. Nasty has been cultivating hardcore and beatdown vibes in their music for quite some time, and Menace marks their first collaboration with Century Media. The result is something that’s heavy and well, menacing, from start to finish.

Menace wastes no time in getting to its punchline. The main tools at the band’s disposal are bruising beatdowns and utterly violent riffs, and these are never meant to be delicate. The guitar tone itself practically snarls at the listener with each note, coupling itself with vocalist Matthi’s urgent screams and shouts to create an almost overwhelmingly heavy sound. The band often dives right into the ‘good stuff,’ and doesn’t flesh songs out unnecessarily. With songs around the two-minute mark, they are meant to be cranked up loud, drop a few massive beatdowns and metallic riffs, and pummel the listener into oblivion. This is something that the band follows through with on each track. “Bulletrain” is less than a minute that simply rages from start to finish unrepentantly. “Betrayer” is another that stands out, with its hardcore riffing machismo and almost groovy vibe while displaying a full set of teeth. “Ballad of Bullets” is the only real exception, as an instrumental that closes out the album it also reaches the 3-minute mark and provides a short of soaring closing statement – complete with some strong melodies and still seething riffs.

A violent and uncompromisingly look at hardcore and beatdown, Nasty’s latest lives up to its name in Menace. It’s brutal, heavy, and unrelenting in its attempt to churn out as much musical destruction as it can in a 30-minute window. And for that, it surely succeeds.