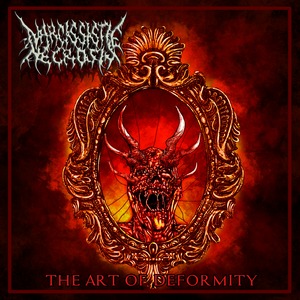 A tongue-twister if there ever was one, Narcissistic Necrosis is a Canadian brutal death metal act that had its origins in being a one-man act that expanded to include a full four-piece member band (though this happened after this album was recorded – it’s all William Bigcrow here). The Art of Deformity is the band’s debut full-length effort, a release that hits all of the usual fanfare for the genre, but doesn’t do much to go outside of it.

There’s not much wrong with Narcissistic Necrosis’ formula, it’s tried and true, but there’s no way to give the band much of an identity of their own. As their debut, it can happen, and while you can’t point the finger at them and say, “It sounds like band x and a little of band y,” they carry with them all of the hallmarks of the brutal death metal genre. Battering full-speed drumming (to the point of being disorienting with the drum machine) with frantic riffing behind it, some occasional groovy slowdowns that push the sound into really heavy territory (instead of being just relentless with speed), and high-in-the-mix vocals that rattle from the netherworld. So it’s pretty furious from beginning to end, and there’s not much in the way of melodies to take in – one of those gut-punch releases meant to give you a beating. As such, any of the tracks will do in this regard, but they end up sounding pretty similar to each other in their flow and patterns.

If you want something truly venomous and attacking, Narcissistic Necrosis will serve up a scorching plate of brutal death metal. You won’t find a ton of variety, but it does know how to hit really hard. Hopefully with an organic drummer, it won’t feel quite so jarring too. If you are big on brutality, you’ll dig this one but outside of that specific tastebud, you won’t find much new to discover here in the longrun.