Nameless One – Thousand Memories and Nameless Sword (Self Released) 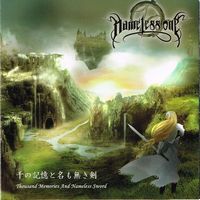 Kyoto, Japan’s Nameless One, a new band formed in 2013, deliver their first EP, a six song, twenty-eight minute burner with Thousand Memories and Nameless Sword. A safe bet this would be most people’s first exposure to the band, stateside, a quick click on the band’s website below will confirm the group’s Japaneseity…strange and unreadable hieroglyphs cover the pages, mascara’d and emo-cutted dudes holding random treasures depict our heroes. I’d tell you about the song titles, but I can not read this strange and foreign code.

Fortunately for a dunce like myself, I speak the language of steel. I know that when I see a fantastical and lush-ass dreamscape featuring a figure with a sword adorning an album cover, I know that is innuendo for axe-shreddery of a high order. How was my translation? Accurate. Suffice it to say, Nameless One rips.

In fact, maybe not since checking out Marty Friedman’s recent solo outing have I been party to so much rippin’. For some, it’s probably a bit much what with each song being basically a non-stop parade of heroic riffs and melodic-to-a-fault solos, but c’mon…this is pretty fun. Sound-wise, this epic/power/melodeath outfit might compare to old (good) In Flames meshed with the guitar acrobatics of Firewind. Thrashy and fast paced is the roll here, while bouncy and upbeat. Unlike power metal, there are no clean vocals herein and much more of an emphasis on the melodeath than anything else. Throat-man NGT delivers a true Gothenburgian performance in some language or another, Nameless One keeping up with any of Europe’s finest purveyors of the product. In fact, where the band adds their own shine on it is with the sheer amount of guitar melody packed into this quick lil’ EP….solos even boasting hints of 80’s cock-rock swagger to boot.

Thousand Memories and Nameless Sword is a fun listen, jam-packed with impressive musicianship and melody to spare.