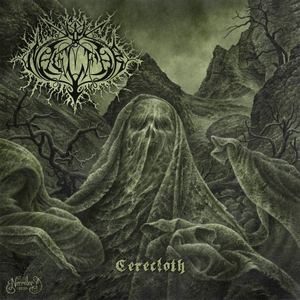 Wow, it’s been eight years at this point since there was any new material from the Naglfar camp. Long revered among the melodic black metal guard for their debut Vittra back in the ‘90s, they’ve still maintained a razor-sharp edge – even if their releases in the past decade have been few and far between. Listening to Cerecloth seems as if the band started back right where they left off, which isn’t such a bad thing.

Long has the band been compared to Dissection, and that’s not something that’s going to change at this point. Naglfar comes back ripping and tearing their way through these nine tracks with plenty of fury behind them. Tremolo-picked melodies, blastbeats galore – it’s the quintessential version of the ‘90s Scandinavian black metal movement with a punchy and contemporary production behind it. You can practically hear the guitars buzzing as a track like “Vortex of Negativity” zips along. Of course, it’s not complete without some triumphant sounding melodies, and the band is happy to oblige with impressive and grandiose stuff coming through, with “Last Breath of Yggdrasil” and “The Dagger in Creation” being two standouts in this regard. The band does acknowledge that one can’t just blast through the album entirely, so these slower melodies tend to stand out, with even some trace elements of doom coming into play on a few tracks to help break up the tracks.

Naglfar continue to do what they do best on Cerecloth. There’s no major alterations to the band’s formula, but for those who have been waiting for Naglfar to return, it certainly will not disappoint veteran fans. The contrast between melody and speed is still the band’s strongest asset, and it’s put to good use in a way that keeps the intensity coming without allowing tedium to set in.