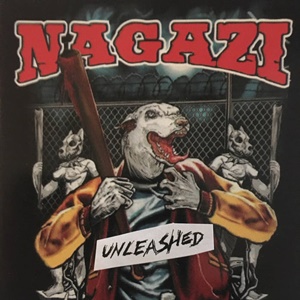 Loud, fast, and heavy – hailing from central Michigan, welcome to the world of Nagazi. Forming in 2014 and with a previous EP under their belt, they’ve gained prime opening slots for diverse acts from Flotsam & Jetsam to Deicide, Nonpoint to Whitechapel – very understandable after a few spins of this second and latest EP entitled Unleashed. The four-piece craft a sound that has a bluesy, caustic nature that can lean on the accelerator a la thrash, but also be groove-oriented to possess that modern/southern-edge stomp.

Leaving extraneous parts for other artists, these musicians keep the arrangements tight and focused – never overreaching and keeping those guitar hooks and grooves top of mind, as vocalist Joe Hafer slithers on top of it all in that Randy Blythe meets Neil Fallon commander of microphone role. The wah-wah aspects from guitarist Matt Ruffino penetrate in a circular fashion for “Monstrous”, while a slower, almost Clutch meets Black Sabbath edge hits all the right earmarks on “Serenity Now”- the moaning clean melodies that occasionally pop up a welcome dynamic twist. The up-tempo Lamb of God/Anthrax pounding with half-time switch-ups makes “Swarm” an ideal favorite of the four – the guitar and bass work often forming this aural buzzing nature that along with a fluid guitar break should get the metal mavens scrambling into formation. Most of the influences for Nagazi come from the 90’s/early 2000’s period of metal (including a pinch of Sevendust, Pantera, and Megadeth here) – where easy to ingest, rhythmic choruses and varied roars/screams became commonplace as well as musically combining multiple genres. Considering there’s only four songs and less than 16 minutes of music, it’s obvious that Nagazi prefer the get in, shake things up, and move forward method of songwriting which ensures multiple playbacks for maximum retention.

Yes it’s a style that we’ve all heard before – but when it’s done well and effectively, it’s hard to resist the devil horns salute and careening against one another in headbanging unity when viewing Nagazi live. Primal and in your face, Unleashed delivers its promise on this recording if you love modern groove/semi-thrash metal.