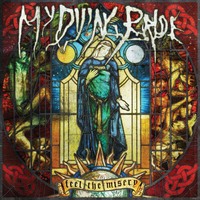 2015 has been quite a year for doom. Paradise Lost, Skepticism, and Shape of Despair have all released some real whoppers and now it’s time for the legendary My Dying Bride to put their two cents in as well. Feel the Misery (the band’s 12th release) sees original guitarist Calvin Robertshaw welcomed back to the fold as well as a return to the band’s old stomping grounds, Academy Studios.

As one of the premier doom and gloom bringers, My Dying Bride has a lot to live up to with a new album (despite some ups and downs within their career). Personally introduced to the band back with The Angel and The Dark River, one of the elements that is synonymous with MDB is that of the violins. It doesn’t take long to get into the opening track, “And My Father Left Forever” to find them in their regal glory. Vocalist Aaron Stainthorpe’s unique, mournful wails echo through the track, filling the song with pain and despair. The gothic ballad “I Almost Loved You” also focuses on both of these aspects (and coupling it with some piano), allowing the track to avoid cheese and simply wallow in beautiful depression. But the band’s heavier side doesn’t sit at bay, starting with the second song, “To Shiver in Empty Halls.” With some sorrow-soaked yet glorious riffs and tortured roars, these two tracks do embody the rest of what you’ll find as you make your way through Feel the Misery. “A Cold New Curse” and “I Celebrate Your Skin” will also tickle your fancy if you are looking for things on the heavier end of the spectrum. Interestingly, the title track has a big of a heavy chug to it, but it works in the context of the band and gives its own spin.

Hard to believe My Dying Bride has been pushing their brand of gothic/doom for twenty-five years. Feel the Misery holds the soul-crushing despair flag high for all to see, and serves as one of the band’s most solid outings in some time. A strong statement considering some of the classics they’ve put forth.