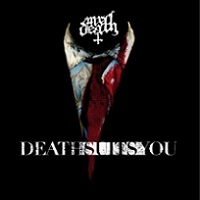 Album cover of the year. Hands down. Like, why can’t more death metal covers be this classy, non-gory, and have such a great play on words? And it’s not that complicated – death metal bands just need to use their stoned-out brains more often. So already, Death Suits You, the second proper release from these Swedish old-school death metallers is out of the gate in a hurry.

Basically running as a reminder as to how monstrous early 90s Swedish death metal was, Death Suits You makes quick work of things in six songs by using all the tools of the trade: buzzsaw guitars, evil melodies, rampant tremolo picking, and ferocious barking. Plus, they managed to get the whole “old-school” production thing down, in addition to employing the vaunted Swedish DM guitar tone that the likes of Dismember, Entombed, etc. ushered in nearly 20 years ago. Good lord, 20 years ago? Did we just say that?

There’s nothing remotely inventive about songs like “On Day 51” or “Curse of the Masses” (which does have a killer opening, mind you), but when your name is Mr. Death, and you have such gnarly album artwork, does it really matter? These guys could have spit out every rehashed Stockholm riff known to man (they come close, actually), and Death Suits You would still have its merits. Nothing tops the original, yet Mr. Death are awfully self-aware, which makes it easy to get behind these guys. 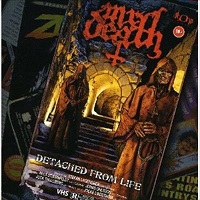