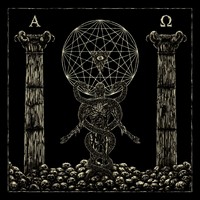 Oftentimes bands blend black metal and death metal into twisted forms that seemingly appeal to one moreso than the other. That’s the interesting thing about Mourning Soul. This Italian band eschews the overt technicality that their kinsman often employ, and instead find a level of appeal that is somehow equal to both the black and death metal portions of their music. All without seeming two-faced.

There’s a blackened shroud that Ego Death – Ritual I wraps itself in while maintaining a curiously death metal format. Some mid-90’s Scandinavian black metal (a la Dissection and Naglfar) can be felt in the acoustic moments and synth region, but the unmistakable death metal riffing – sometimes moving towards more modern Septicflesh territory (particularly in how the synths blend in), sometimes moving towards darker and thunderous territory a la early Sinister. Then things flip and you can hear some distinct tremolo picking black metal and whirlwind riffs as the tempo builds and a flurry of blastbeats backs things up (see “Resurrection Through the Serpent’s Light”). Yet the transitions are smooth – despite the shifts in dynamic it sounds whole and in fact, stronger than if the band had decided to go one route or the other separately. Melodies hold it together here, with even more frantic numbers like “Moribunds” employing melodic leadwork as fervently as more methodically-paced and atmospheric tracks like “The Judgement of Gehenna.”

Bound by atmosphere and subtle melodies that will sneak up on you with repeat listens, Ego Death – Ritual I is more than it may initially appear. The dark regime and sinister order of both black metal and chaos of death metal are well-covered by many bands, but Mourning Soul has plenty of knowledge to back either side without sounding illegitimate to either. It’s also the key to their future successes.