Motorhead – The World Is Yours (Future PLC/Motorhead Music) 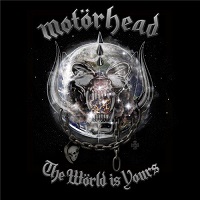 At this juncture, it’s next to impossible to knock Motorhead. Any band that has been able to hang around for as long as Lemmy and co. must be doing something right, and if that’s not prevalent to thee, oh faithful reader, then that must be one giant boulder one is living under. The World Is Yours is the band’s 20th studio album. Yeah, 20th studio album.

In slight contrast to 2008’s excellent Motorizer, The World Is Yours has more of blues flavor than the straight rolling metal vibe heard on its predecessor. No surprises here, the songs are quick, remarkably simple, but awfully effectively, specifically “I Know How To Die,” which has to be one of Lemmy’s best song

titles considering the man probably doesn’t know how to die if he tried. If he did, he’d probably croak onstage. The dude is indomitable.

There’s not a bum track here, although this all rings awfully familiar, something that should be expected (and relied upon) for Motorhead. “Brotherhood of Man” does evoke a more brooding vibe, while drummer Mikkey Dee gets his double-bass workout during “Outlaw.” “I Know You What You Need” falls in line with “Outlaw,” keeping the band’s storied metal sound intact, even when the band is pushing well past 60.

Because of their well-honed formula, Motorhead can crank out albums with ease. And yeah, The World Is Yours isn’t Bomber or Ace of Spades, but it matches up well against other albums from other old-timers. Who wouldn’t be surprised if the band made it to 40 albums?