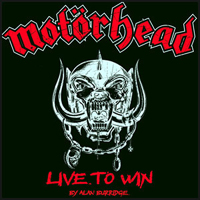 A play on the band’s notorious “Born to Lose” credo, Live to Win is a lovingly-assembled book by Motorhead fanclub president Alan Burridge, who has been with Lemmy and crew since 1979. Pictures (vintage, revealing, exclusive, you name it) are in full supply here, making it a visual delight for those who are charmed by Lemmy and the various goons he’s trotted out since his fortuitous Hawkwind ouster in the mid-70’s. And judging by the cast of characters assembled in the book, there have been a lot.

Burridge takes us in chronological order, starting with the aforementioned Hawkwind days, which as the story goes, were cut short thanks to Lemmy’s drinking and drug use. The early beginnings of Motorhead are detailed, including text on the band’s first rehearsals, gigs, and so forth. Naturally, many weren’t too keen to Motorhead’s fresh brand of punk metal, which probably was encouraging to Lemmy, given the band’s initial mission statement of “We want to be the band that if you lived next door to us, your grass would die.”

The guts of the book focus on the band’s commercially successful 80’s run, spurred by of course, “Ace of Spades.” Yet aside from the songs that are live staples to this day (“Dr Rock,” “Overkill,” “Bomber” et al), it’s the stories behind Motorhead’s various lineup formations that are the real catch here. From the initial and second departure of drummer Phil “Animal” Taylor, to the guitar spot revolving door of “Fast” Eddie Clarke, Brian Robertson, Wurzel, onto still standing lone guitarist Phil Campbell and drummer Mikkey Dee, the personalities that have infiltrated Lemmy’s camp are second to none.

Perhaps the only beef in regard to Live to Win is that some of the pictures appear to be out of chronological order, as in shots that were obviously took in the 70’s, pop up in the sections in the 90’s and 00’s. A minor gripe, but that’s it. As a whole Live to Win benefits greatly from Burridge’s first-hand knowledge and experience of the band, and emerges as the type of book that’s hard to put down or leave idle on your beer-stained coffee table.