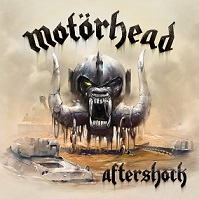 A world without Lemmy is a bit of scary, almost unfathomable thought. These guys are supposed to be indestructible, you know? They’re supposed to be able to exist on a steady daily diet of cigarettes and Jack and Coke, with none of the side-effects, able to get up on stage like they’ve been doing it forever…which Lemmy pretty much has. So all of these recent health scares have sent folks for a jolt, prompting them to clutch onto Motorhead a little bit tighter than before, thus explaining a lot of the commotion regarding Aftershock.

Some have kicked the word “diversity” around when discussing Aftershock, and yeah, there’s some merit to it. Per the band’s countless previous releases, the barroom/biker metal of “Heartbreaker,” “End of Time,” and “Death Machine” constitute the traditional, expected side of the band, but it’s the blues-drenched “Lost Woman Blues” and near-melancholic (!) “Dust and Glass” that emerge as the real standouts. And it’s not like the band isn’t cranked all the way (to 11) on these jams, it’s just refreshing to hear the three men slow it down, let Lemmy ramble, and play with some restrain. They certainly have the chops to do so.

‘Ole Lem doesn’t appear to be in too much of a reflective state, instead the carefree and loose “Going to Mexico” and piano-infused “Crying Shame” give new meaning to the band’s rock-boogie. And no one would have found fault with Motorhead putting their collective head down for another batch of straightforward rockers, but the fact so many of these songs mix it up so well will probably put this album in play with Ace of Spades or Iron Fist. Not too shabby for a bunch of cagey veterans, one of which will turn 68 this holiday season…