Thanks to the explosion of information available on the internet regarding every nook and cranny metal band who released a single, demo, or EP on a limited basis, many of these acts who couldn’t gain much of a buzz beyond their local city or country are now followed on a worldwide cult basis. Austria’s Mortician are a pure heavy metal group who originally made their first go around from 1983-1990, releasing 2 demos and an EP during the late 80’s that developed collector’s demand over the years. Reuniting in 2009 with guitarist Thomas Metzler and bassist Patrik Lercher, they gained a new singer that same year in Daniel Khan and for this album their latest drummer Alex to release a second studio album, the aptly titled Shout for Heavy Metal.

Mortician throughout remind your ears of a time in the 1980’s when heads down, banging riffs and simpler drum grooves ruled the airwaves. Songs such as “Black Eyes” and the Judas Priest meets Breaker period Accept number “Eagle Spy” chug along at a comfortable 4 to 5 minute clip, Patrik’s bottom end bass thump equally important to set up Thomas’ chord combinations and uplifting transitions. They even up the speed in more of a throwback to early Metallica days during the opening riff choices for “Inner Self”. Whether intentional or not though, Mortician does nick one of the more infamous Saxon riffs for their own “Rock Power” as you can hear the main riff for “The Power and the Glory” throughout, and I would think at this point in their career the plagiarism isn’t necessary.

Ultimately my struggle for a full recommendation lies at the eerie voice of Daniel Khan. Check out the phrasing and out of key warbling during “The Devil You Know” or the slower, moodier “Hate” for what I’m talking about – it’s like a strange concoction of Lizzy Borden, Rob Halford, and maybe a mid-range substitute of Sacred Steel’s Gerrit P. Mutz filtered through Bon Scott. Ending notes in weird tones, choosing to go up and down scales in unconventional patterns – it makes this 9 song record difficult to make a continuous pass through without fits of laughter.

At this point, Mortician are probably set in their classic heavy metal platform, and I’m sure the ardent 80’s collectors will still find much to champion here. Shout for Heavy Metal for my money offers up a distant whisper compared to their influences. 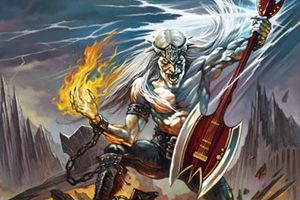