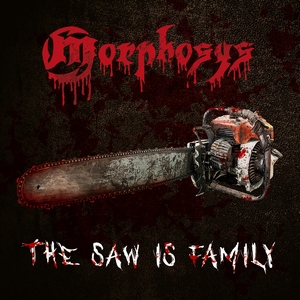 Just when you thought Exhumed had done all that could be done with the saw, comes Germany’s Morphosys. Starting things up back in the early 2000s, this is the band’s third full-length album, following a six year break in between. While there’s nothing inherently wrong with The Saw is Family, it’s all a bit too familiar.

Morphosys hit up an older death metal sound that’s threaded with some thrash metal oomph. A listen to the title track should give you exactly the right impression of the approach they’ve taken. A strong focus on mid-tempo thrashing with plenty of death metal weight to it, with a number of upticks in speed used to help with variation. They finish the album with a cover of Massacre’s “Corpse Grinder,” which fits right in stylistically if you are looking for an even quicker comparison. One of the album’s strongest points is a focus on some more traditional leadwork, offering some more heavy metal comparisons (as opposed to leaning too far into death) and it works well within the context. But it’s not enough overall to sway the impression. There’s just an overwhelmingly familiar vibe to The Saw is Family, to the point where, despite some catchy riffs, nothing really sticks with you once it’s over. There’s nothing over-the-top that compels you to return to the album, even after a few further listens to help with dissection.

It’s a catch 22 for many of these types of death metal acts. They cling to the style and perform it with some deadly accuracy, but it makes it a chore to find much that makes them sit out from the rest of the horde. Your viewpoint of The Saw as Family as being death metal for death metal’s sake will determine if it’s a winner or not for you personally.