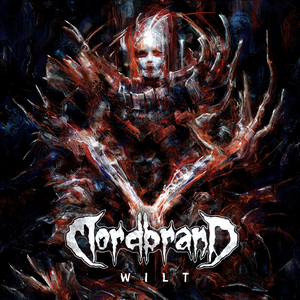 Lots of Swedish death metal coming through the pipelines as of late, though it’s not too far from the norm in recent years. With everyone seemingly wanting to get in on the action, it can make for some great albums as well as some true duds. Mordbrand’s second full-length, Wilt, doesn’t really fall into either of the two extremes but rather sits comfortably somewhere in the middle of the road.

Those looking to be surprised or find some sort of innovation with the old school sound will not find any of that here. Mordbrand stick to the tried and true methods, for better or worse, as they move through Wilt. One could list out all of the genre’s usual descriptors and simply check off the boxes as they go. But for what it’s worth, a few things stand out. For one, the production (mixed/mastered by Darkane’s Lawrence Mackrory) is particularly lively – still capturing that filthy/grimy guitar tone that we all know and love but still crisp enough to tell the band wants a more modern and discernable sound. Likewise, while they do certainly check the box for those underlying melodies, Mordbrand isn’t afraid to really go for the throat in terms of aggression. Tracks like “At the Larvae Column” or “Venomous Myrrh” have a frantic edge that serves the band’s sound nicely. On the other end of the spectrum, the closer “Give in to Oblivion” has a mellow build-up into more torrid waters that finishes the album on a high note.

While it may be more than a tad predictable for the most part, Mordbrand’s Wilt does possess the Swedish death metal scene’s finest qualities. How enamored one is for the sound will ultimately determine your level of enjoyment, and die-hards will certainly get a few thrills from it.